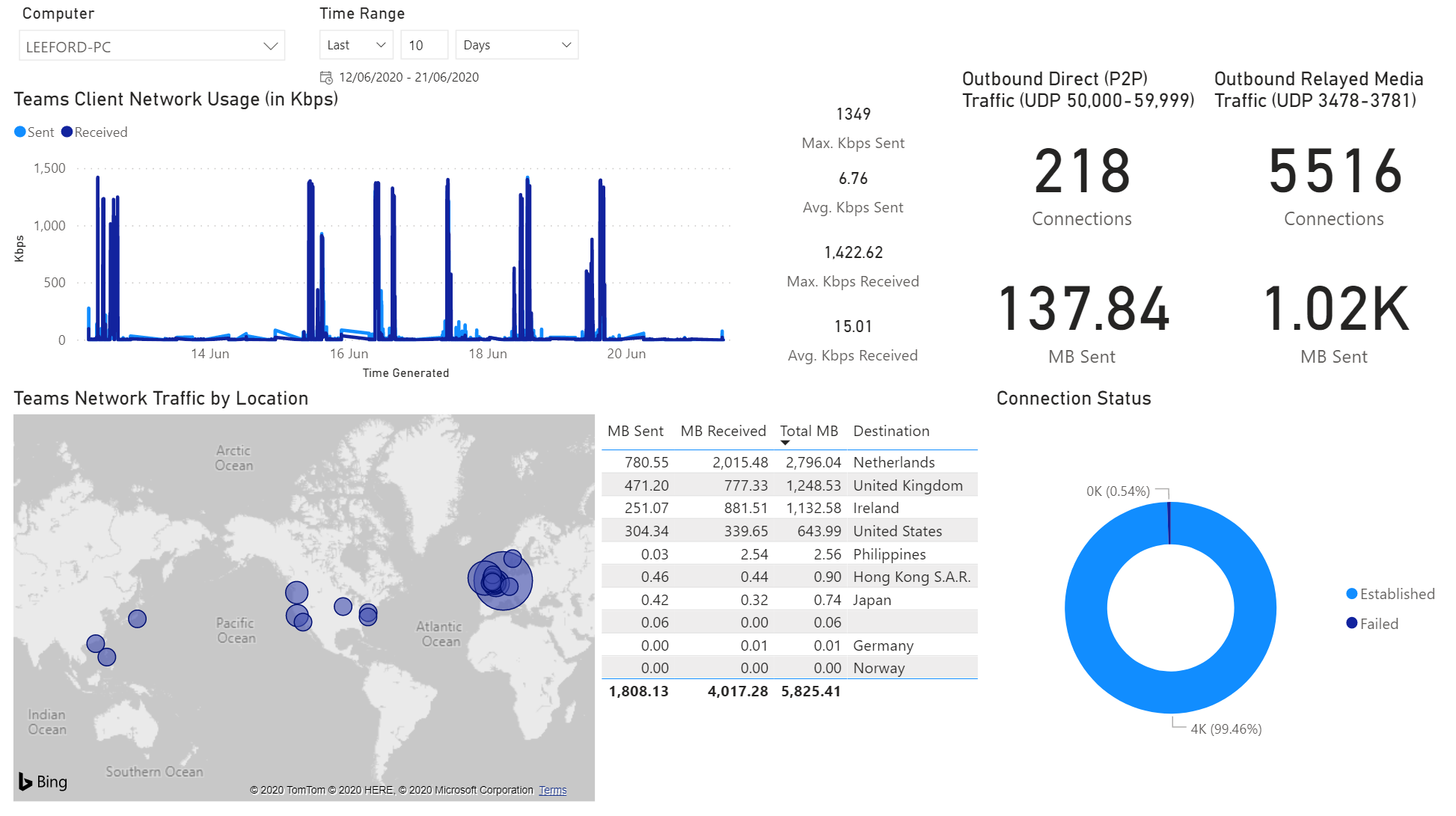 Have you ever wondered how much network traffic Teams uses? I have. Not just for curiosity, but for performing a network impact assessment when helping organisations roll out Teams. Although Microsoft do provide estimated figures for this purpose, it doesn’t hurt to see how real-life usage compares.

I have previously written about preparing your network for use with Microsoft Teams, and part of the process is determining the estimated network bandwidth that Teams will consume and the path it will take. It is vital to determine this before-hand so the network can be prepared and provide a good experience to users of Teams.

Before I go in to measuring Teams network usage, it’s worth noting the aforementioned bandwidth requirements Microsoft recommend when using Teams:

Note: These are not exact figures, more an estimation of each scenario - real-life usage will differ

With some ball-park figures in mind, you could just use these as a basis for your network impact assessment. But I wanted to see how real-life figures stacked up against this.

There are many ways to monitor the Teams client network traffic, but I am going to show you two options. It is important to note, I don’t need to capture the actual payload of the traffic e.g. Wireshark - just more what the traffic is.

If you are just concerned with a very rough network usage figure, an easy and basic test can be performed by using Resource Monitor (built-in to Windows). You can use it to monitor the Teams.exe process and see the sent/received bytes per second:

Whilst this is a quick and easy way to see Teams network usage, it does have its limitations:

Thankfully there is a tool you can use to record all your network traffic in a much more useful way - Azure Log Analytics Service Map. By installing the Log Analytics Agent and Dependency Agent you can have your machine(s) send all network stream information to a centralised database (workspace) to report upon.

This solution will record all network traffic, not just Teams. Whilst this blog post is centered around Teams, this solution can be used for other network monitoring purposes

Service Map records the following (and more) attributes for each stream every 60 seconds:

This solution is built on Log Analytics, as such it will be charged against this service. Check here for pricing.

Unless you deviate from the retention period of 30 days, you will not be charged for data retention - if you want to track network traffic over a longer period this will need to be extended.

For data ingestion, you will be billed monthly for each GB of data ingested. In my tests, a single machine was generating around 80MB per day (around 2.5 GB per month), but will likely be different based on how many network streams are captured an how many hours the computer is used each day. It’s pretty low-cost to use in small testing scenarios.

Service Map is split in to two parts:

I’ll now cover how to set this up for yourself.

Service Map is a ‘solution’ installed within an Azure Log Analytics workspace. You can choose to either install this on a new workspace or use an existing one. In this example, I am using a new workspace.

With the Service Map solution deployed in Azure, the final step is to install the Log Analytics agent and Dependency agent (Service Map agent).

After waiting 15 minutes for the agents to start polling data, you should now be able to see some data in Azure

The first step is to locate the workspace you used for Service Map and click Logs on the left hand menu. You should be given a box to type a query in to. For now, type the following to return all network streams that include the process (application) Teams:

As long as Teams has been running on the Agent machine, this should return multiple streams that Teams used:

If you dig a little deeper in to a stream, you will see all sorts of useful information: 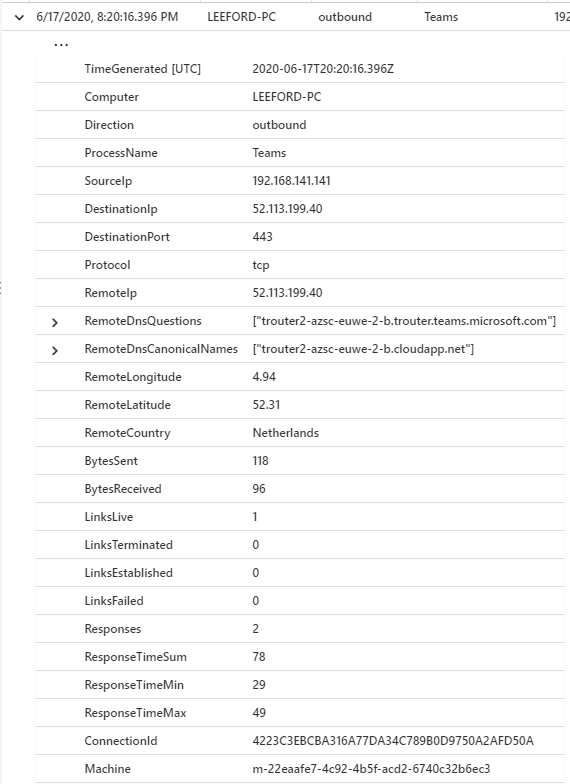 Whilst this post isn’t about troubleshooting, this tool absolutely could be used for that:

To make it a bit more readable, you can run queries that output to charts/graphs. This command will plot the Sent and Received Kbps that Teams was using: 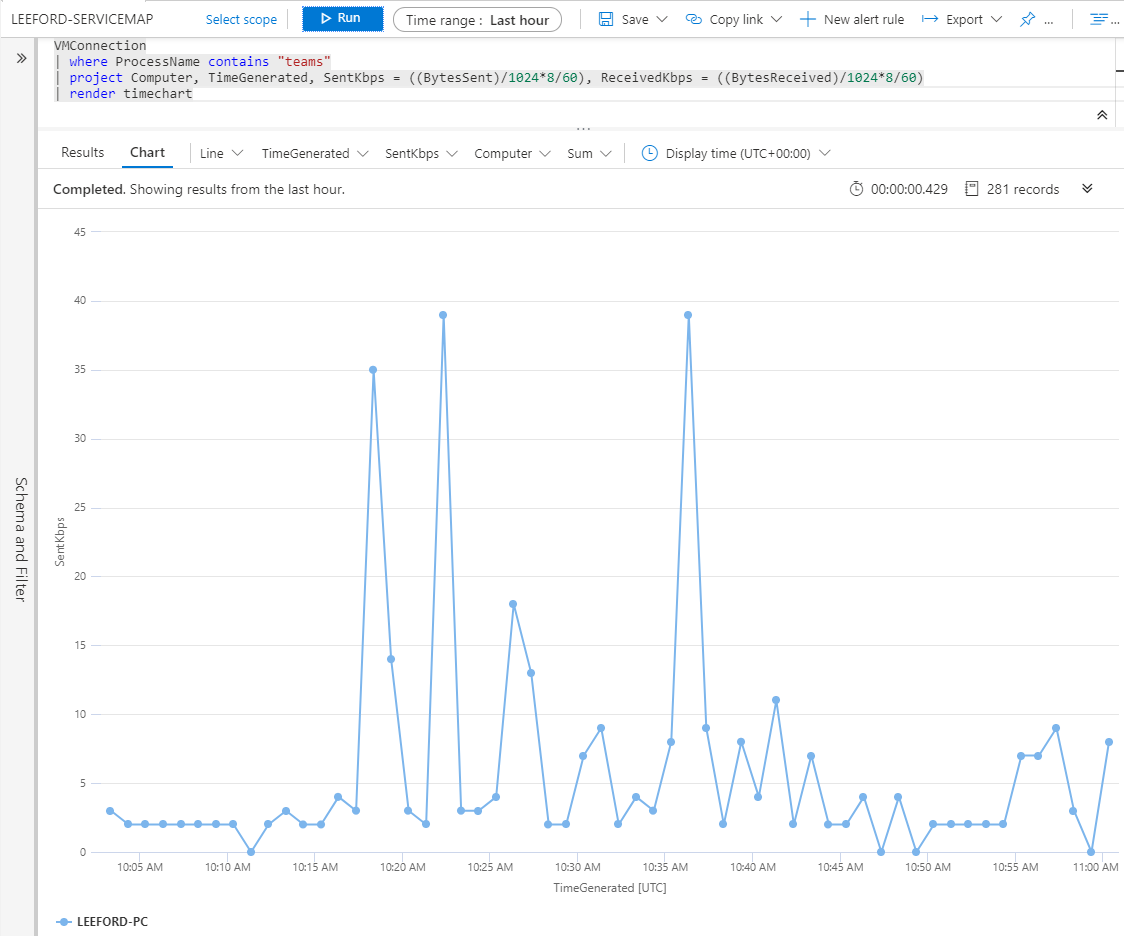 During this period I was on a couple of brief audio calls, which lines up with the estimated usage (additional 30Kbps)

Another example query is highlighting what countries the Teams client is communicating with: 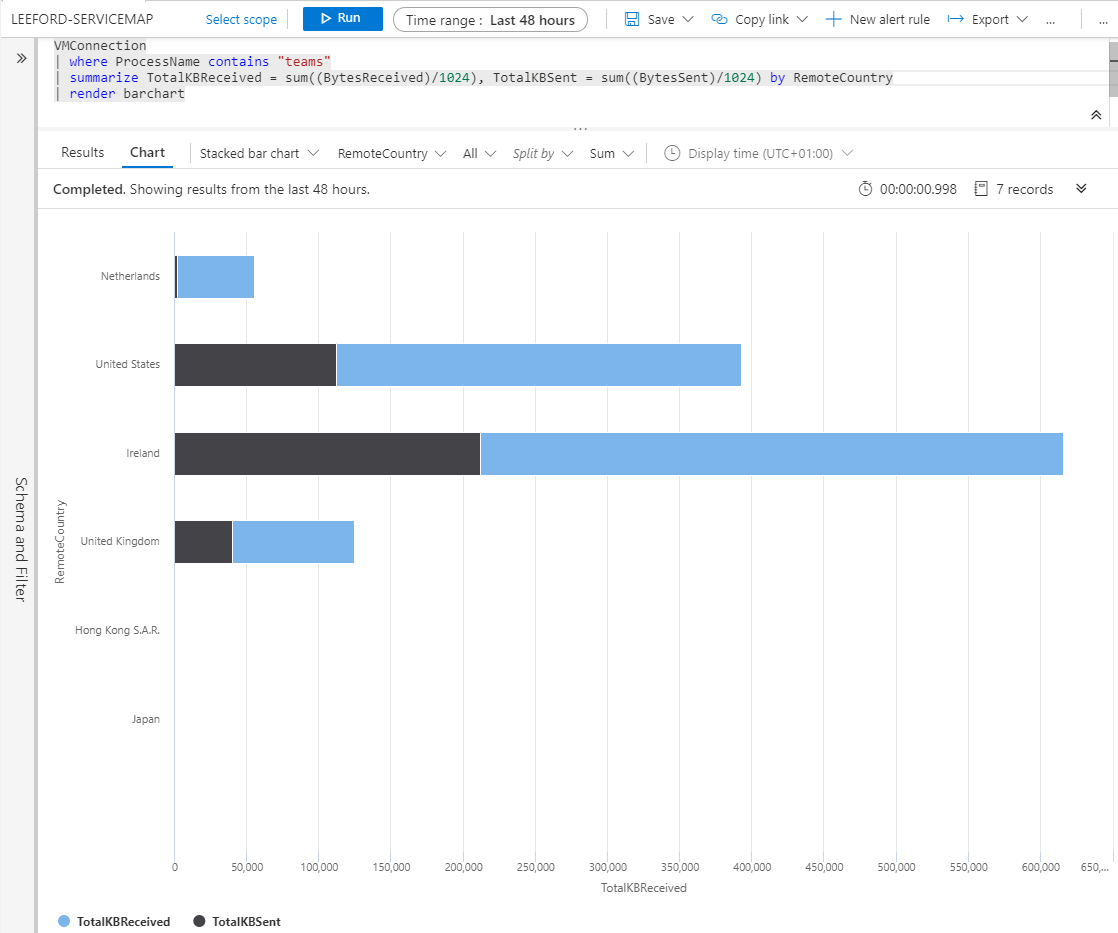 This is just a couple sample queries, whatever information you are looking to glean - there will be a query for it.

I won’t go in to detail on how Workbooks are created, but you can use log queries within them to provide information is a more readable format.

I’ve provided the sample Workbook above here if you would like to use it.

In addition to workbooks, it is possible to export any Log Query to Power BI. On performing a log query, you have the ability to export the query in Power BI query language and can be used as a data source in Power BI.

With one log query, you are able to pull through all the data of the Teams network traffic in to Power BI. How you choose to slice it, is up to you!

From this report I am able to tell the following:

This is something I quickly put together but you should hopefully be able to see how this could be useful.

After capturing some calls in using Teams, I was keen to see how these compared estimated figures (by Microsoft).

Using a log query, I was able to see the Kbps of each 60 second audio stream.

This query assumes the Teams client is using the default 50,000 to 50,019 client ports for audio. Port 3479 is what the Teams service uses for Audio.

This will list each 60 second network stream and provide the average Kbps over that 60 seconds:

To work out the average value, I just added a summarize to the query:

I also did the same for receive:

This indicates that all audio calls for 7 days:

I’ve performed this query with two more scenarios and here are my results:

Note I have combined Peer to Peer and Group calling (as well as resolution) as a combined figure as the ports used are the same no matter the scenario outlined by Microsoft.

Remember, this is what my Teams client was reporting, your figures will/may vary, but as you can see, my results are not a million miles away from Microsoft’s figures.

Having implemented Service Map and monitored of a prolonged period I believe it is a great tool for gauging usage of Teams within an organisation. In an ideal world, I could see this being used to assess potential impact before you fully roll out Teams - ideally in different locations and business functions to see how usage may differ between them.

One key point I’ve not called out - all Teams traffic is captured, so you are also able to capture OneDrive/SharePoint file downloads or any other LOB app that is being used within Teams (which are not covered by Microsoft’s figures). For example, I viewed a website tab to a Team and this traffic was captured: 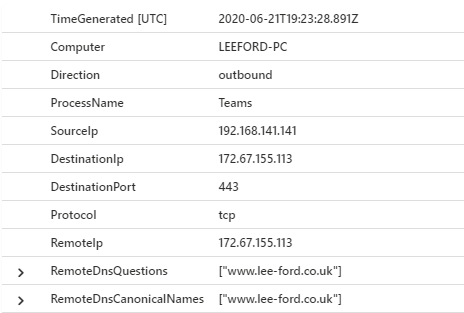 Another point is that whilst this tool can be useful for diagnosing potential issues that may lead to poor call quality (blocked ports, routing to incorrect region) it won’t monitor any network metrics such as jitter or packet loss. For this, you will still need to use CQD or Call Analytics.

Hopefully you have found this useful you will want to test this solution out for yourself. If you have any questions, please don’t hesitate to get in touch.