Adaptive Cards are actionable message cards that are adaptive depending on user interaction. Adaptive Cards can be used in different Microsoft 365 applications such as Outlook, Teams, Bots etc. but maintaining a native look and feel to the application they appear in. Whilst this post is centred around Microsoft Teams, one great feature about Adaptive Cards is that any card created can be re-used, no matter what application, within another application that supports adaptive cards.

Note: Whilst there is no real coding involved with Adaptive Cards, it is instead defining a card with JSON and you will at least need to be familiar with JSON.

For more information on what Adaptive Cards are, I recommend you check out the Microsoft Docs section here.

As mentioned previously, there is no coding or scripting but rather declaring how you want your card to look and behave. Typically, your card will consist of the following parts:

The purpose of this post is not to explain here all the possibilities of the schema, but a full breakdown of the schema can be found here.

Note: There are different versions of Adaptive Cards, so, for example, if you plan to use a property available in version 1.2 you need to ensure you specify “1.2” in the version property. As of Feb 2020, Teams supports up to version 1.2.

Before we create our own card, here is very basic schema of a card:

As you can see it has properties, a body and actions. The card itself would look something like this (in Teams):

Thankfully, you don’t have the create the whole card just using JSON and a text editor. Microsoft have created a tool called Adaptive Card designer, allowing you to visualise your card whilst creating it: 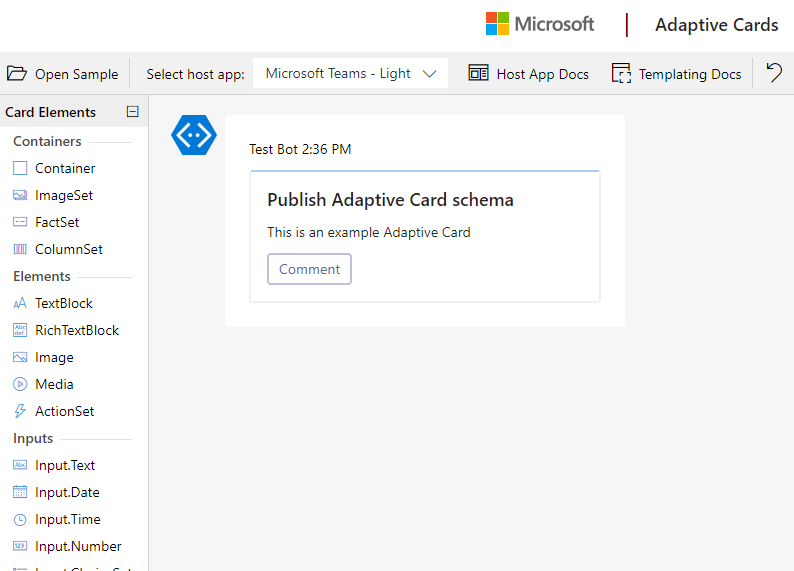 Using the designer, we are now going to create an Adaptive Card. In this example, the Adaptive Card will post new tweets in to my Teams client that mention my handle @lee_ford. At this stage, we don’t need to worry how it will work, we are just interested in designing the Adaptive Card that will be shown as a result.

This Adaptive Card is just a basic example for this blog post, Adaptive Cards are very customisable and your own can look and behave completely different to this.

Firstly, go to the designer at https://adaptivecards.io/designer/ and select Open Sample - I’ve chosen Activity update. With that loaded, lets go over the basics of the designer.

There are four main parts to the designer: 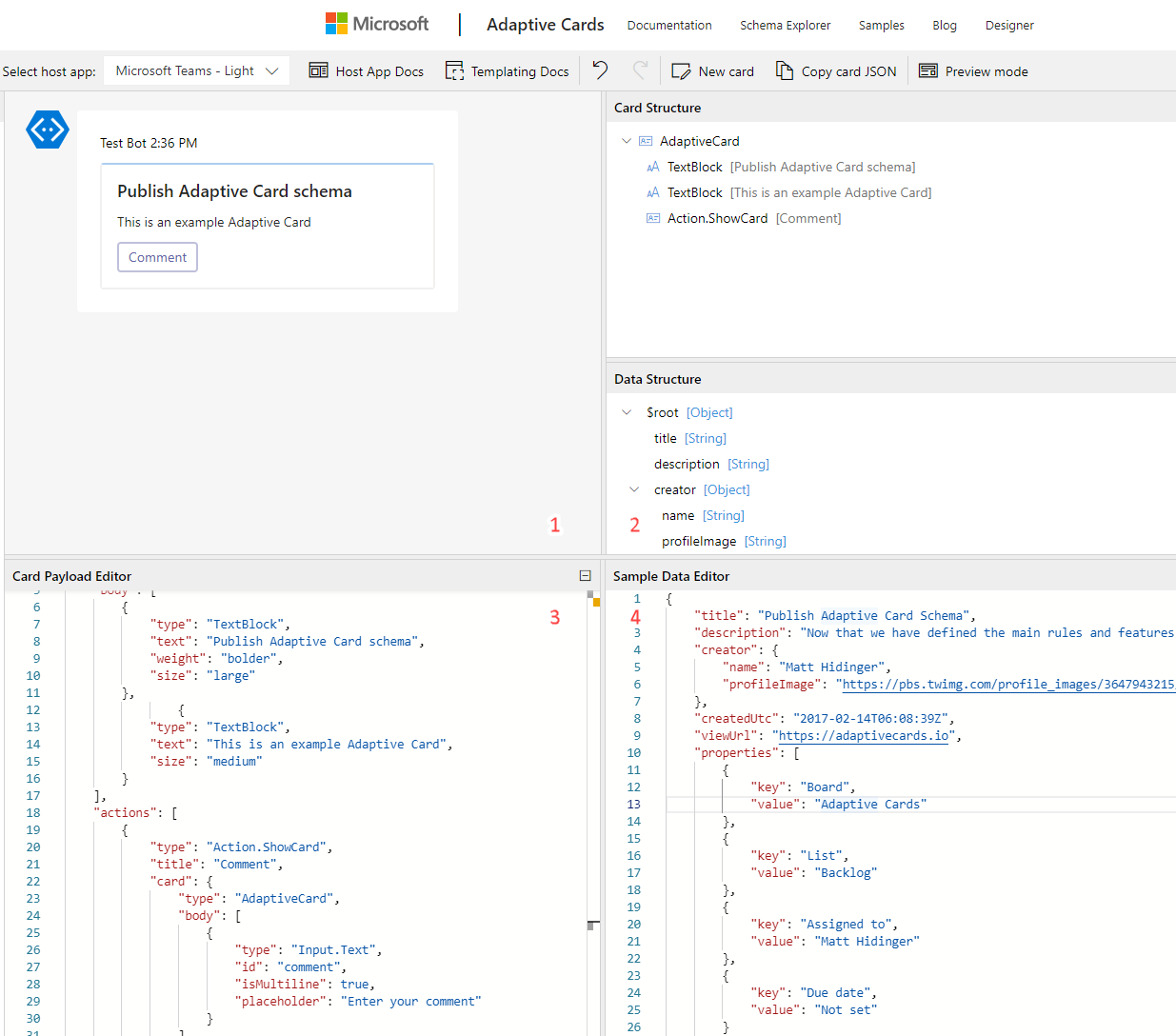 I highly encourage you have a bit of a play with the designer now to see how adaptive cards come together.

Once you have familiarised yourself with the designer, go ahead and paste in the following JSON as a base for our Adaptive Card:

At this stage, it doesn’t look particularly useful or readable – this is because most of the card is referencing values to a Flow/Power Automate we haven’t created yet. If you want to tweak any part of the card now, feel free to do so being careful to not remove any references to @{triggerBody()….}. 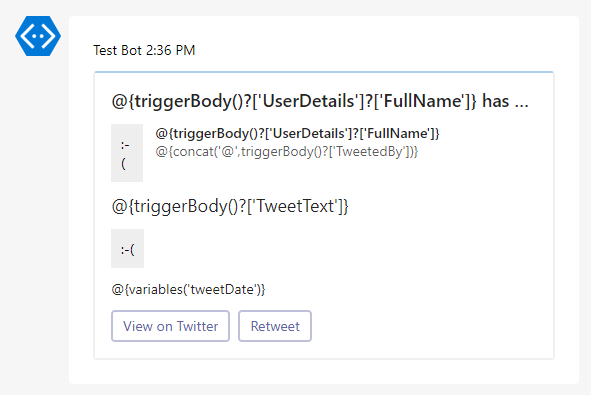 Whilst there are other methods to post Adaptive Cards into Teams, Power Automate or Logic Apps is an easy method that anyone should be able to use.

Rather than just have you follow a long list of button clicks without learning much; I have included a pre-configured Flow package to import. The package can be found here.

Note: If you tweaked your card earlier when you initially copied it into the designer, you can copy this straight into the editor.

Use the Adaptive Card

With the Flow created and setup, all that is left to do now is test. Once a tweet matches the criteria set in your Flow, it should post an Adaptive Card to the logged in Teams user. As it’s an adaptive card, the user in Teams can view the tweet on Twitter or just retweet the tweet from Teams (the Flow is waiting for an action before completing).

Feel free to use the example provided for your own projects and let me know what you use your Adaptive Cards for!